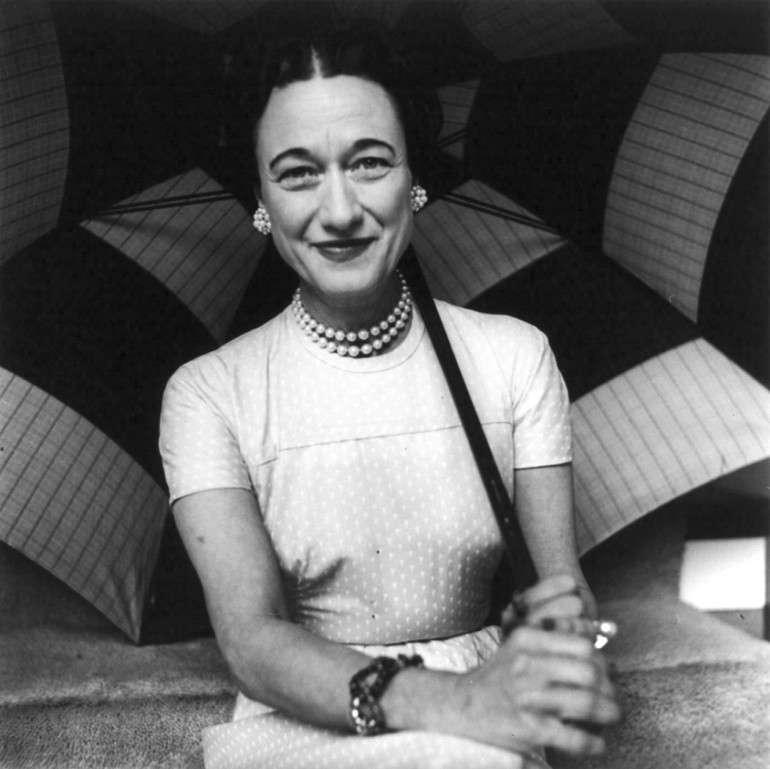 Wallis Simpson (1896-1986) was the highly controversial American socialite that made headlines for stepping out with Edward, the Prince of Wales. Born in Pennsylvania, Wallis had been married twice before meeting Prince Edward and upon his decision to marry her, he was forced to abdicate the throne. The two wed on June 3, 1937 at the Château de Candé in France (Cecil Beaton was their photographer) and were given the titles of the Duke and Duchess of Windsor. The subject of countless books and films, the Duchess' story, style, and questionable political affiliations continue to spark heated discussion even today.

1. Time magazine honored Simpson as the “Woman of the Year” in 1936. It was the first time the award was given to a woman. Other finalists that year included: Lou Gehrig, Mussolini, Margaret Mitchell, FDR, and Jesse Owens.

2. For her engagement photos, Simpson wore a white gown with a large lobster painted on the front. Elsa Schiaparelli designed the gown and famous artist, Dali, painted the lobster. The purpose of the photo shoot was to bring positive press to Wallis and Edward. Unfortunately, the location of the lobster motif spurred much gossip, turning the simple photos into yet another ordeal.

3. Wallis and Edward loved pugs. They had several with names such as Davey Crockett, Ginseng, Trooper, and Black Diamond. The pugs had custom wool coats made by the Duke's Savile Row tailor and the Duchess loved to decorate with pug motifs. She had eleven needlepoint pug pillows at the foot of her bed.

4. The photo of the Duke and Duchess hanging in the National Portrait Gallery is by Richard Avedon. Knowing that the two were dog lovers, he told them a story about seeing a taxi run over a poor little pug. He then took a picture when their faces appeared the most distraught.

5. The Duchess summed up her life in one sentence: “You have no idea how hard it is to live out a great romance.”

Ugh I expect more from Matchbook than promoting Wallis Simpson (really there are much more interesting women). She was profoundly racist even for her time (you should read her letters about visiting foreign countries!) and should she have become queen, Nazism would have been virulent in England.

She and Edward were also Nazi sympathizers (Edward wanted to placate Hitler) and threw parties for Mussolini. Their love story does seem terribly romantic, but they were fascist supporters of the holocaust. Hardly mere "questionable political affiliations" that "continue to spark heated discussion even today."