Up Close: At Home with Christiane Lemieux of DwellStudio 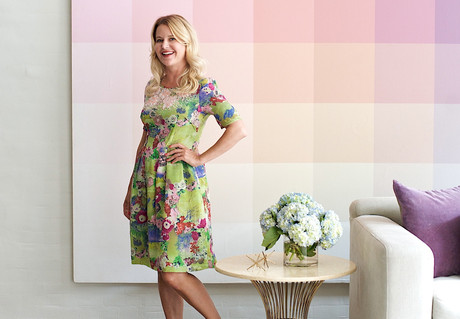 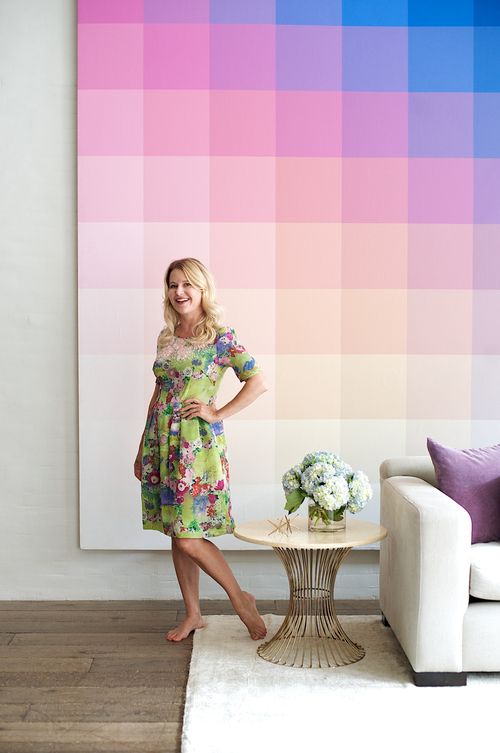 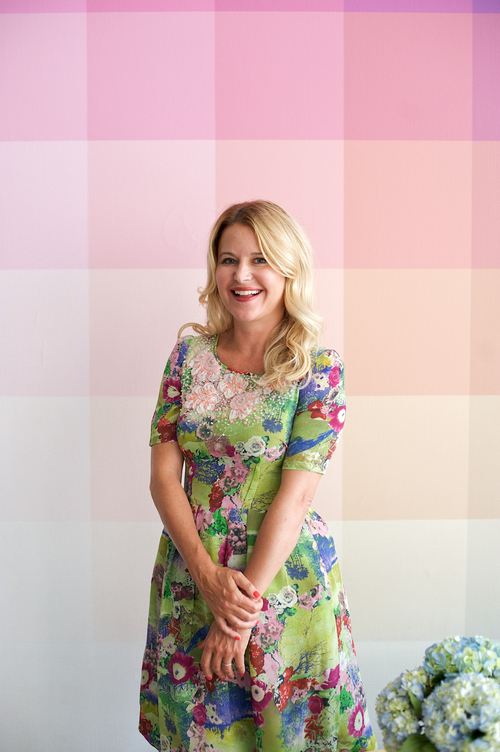 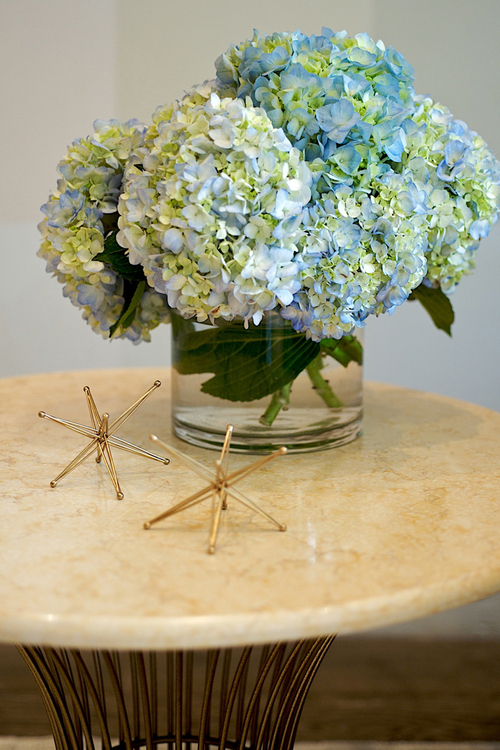 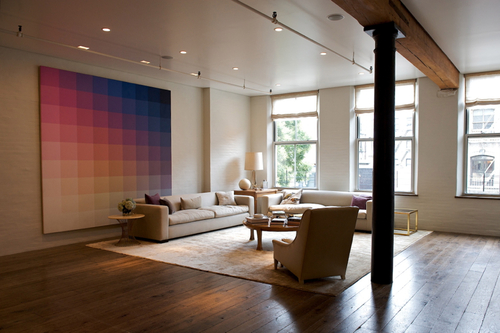 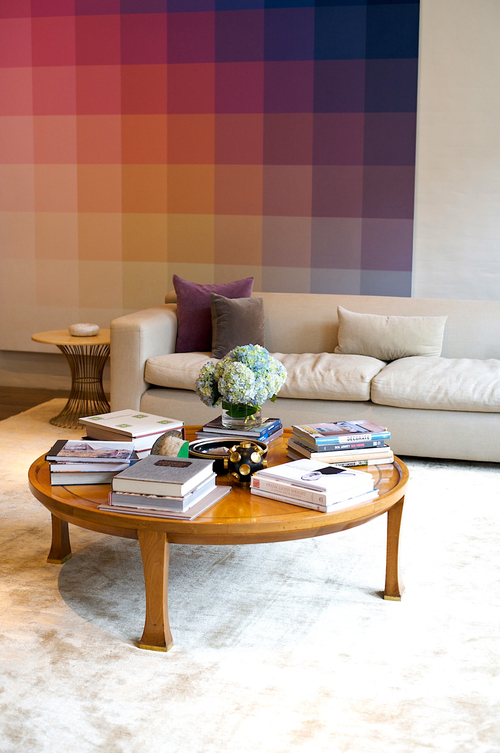 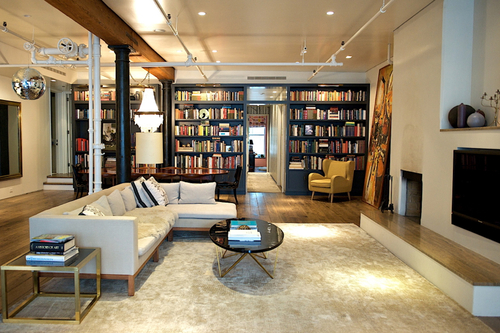 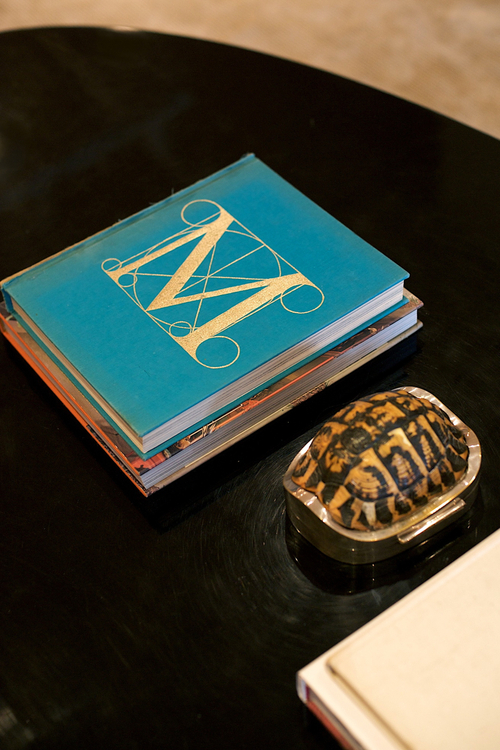 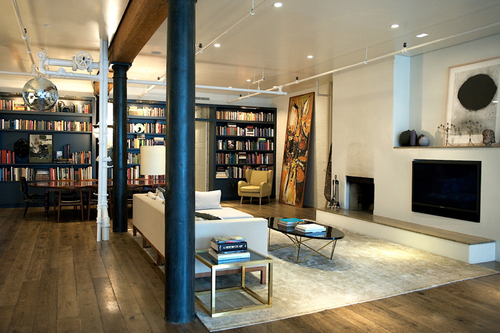 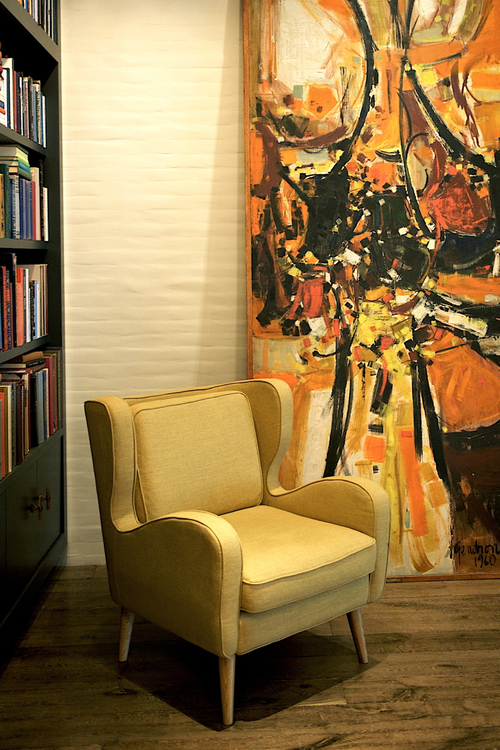 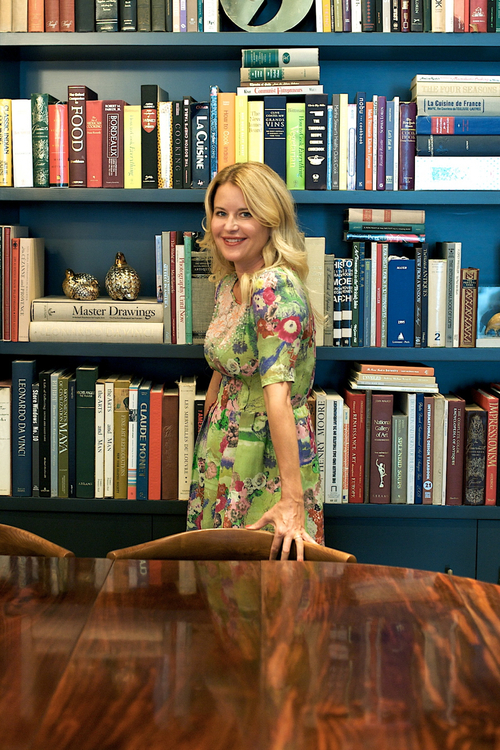 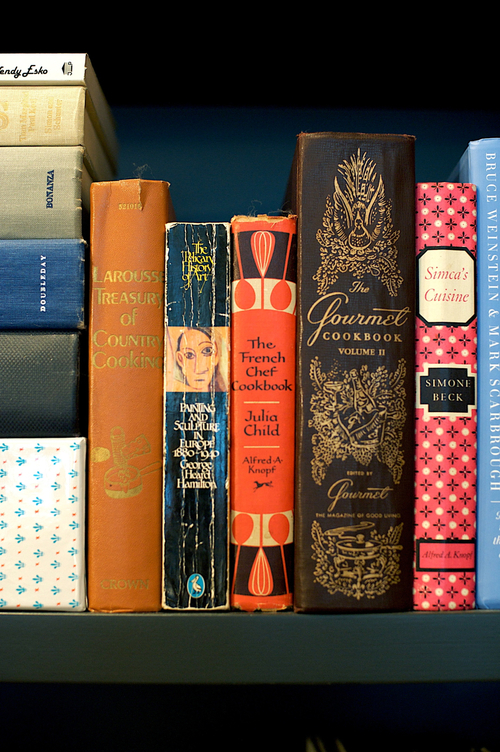 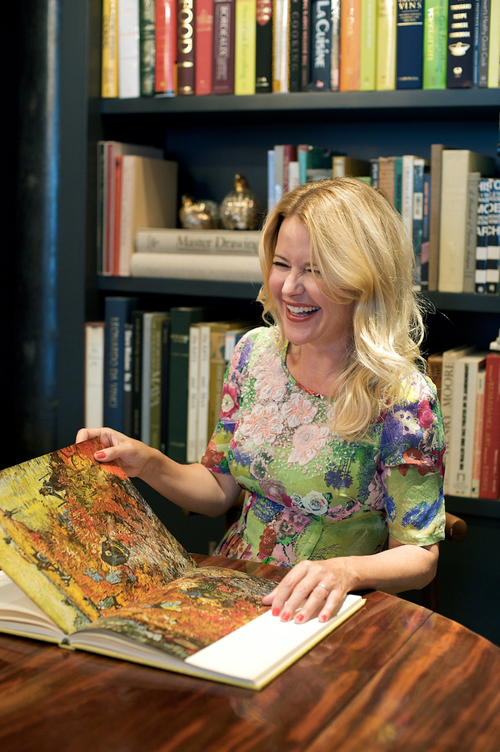 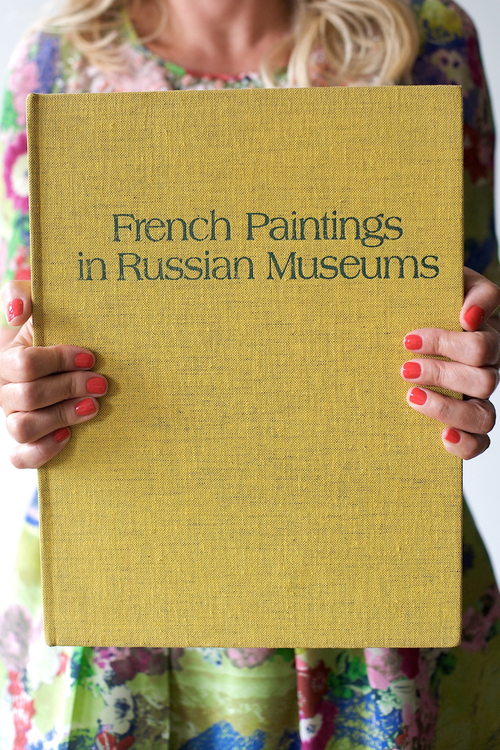 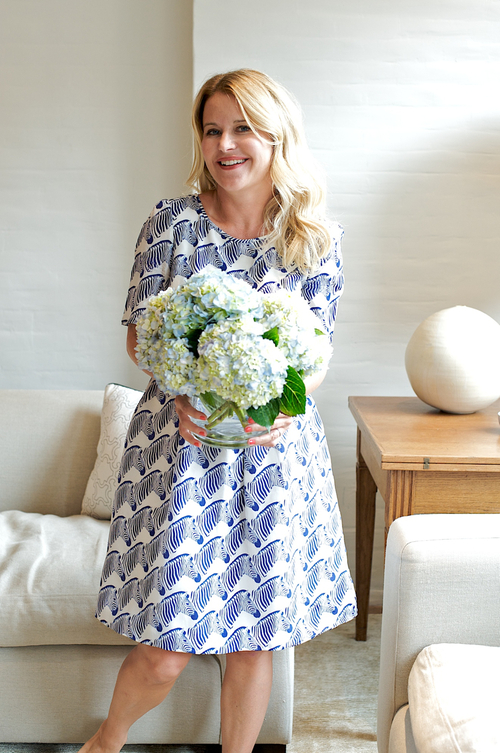 Click to enlarge Image
Photographed By Carol Dronsfield
decor > Up Close: At Home with Christiane Lemieux of DwellStudio
1/15
Flip through to see Christiane Lemieux's beautiful SoHo loft. Shop our favorite DwellStudio pieces below!
Christiane poses in her living room.
The painting is by artist Robert Swain.
Fresh hydrangea brighten up a side table.
The family's SoHo loft.
The Robert Swain painting hangs in the living room.
The back walls are lined in bookcases.
The antique tortoiseshell box once belonged to Christiane's mother-in-law.
A view of the living and dining areas from the kitchen.
In the dining area, abstract art leans against the wall.
Christiane poses in front of her bookcases.
We couldn't help but be envious of Christiane's vintage cookbook collection.
Christiane shows us one of her favorite art books.
Christiane has a weakness for old books with colorful linen covers.
Christiane in her living room wearing a Peter Som dress from Anthropologie.
×
◄ ►
Fullscreen
0 Comments

From her vintage cookbook collection to her insatiable wanderlust, DwellStudio founder Christiane Lemieux is a Matchbook girl through and through. Since founding her home furnishings company in 2000, the Canadian entrepreneur has delved into furniture design, penned a book, and collaborated with Target. Her first title, Undecorate, won critical acclaim and the Ottawa native is already hard at work on a second. Our team dropped by the SoHo loft Christiane shares with her husband and two children for a glimpse of this thoroughly modern Matchbook girl in her super chic element.

You’re a proud Canadian. Do you think Canada influenced your aesthetic in any way?

It definitely has. Canada is interesting; it kind of has one foot in the American aesthetic and one foot in the European aesthetic. There’s a lot of Scandinavian influence up there. I moved from Canada to New York when I was twenty to attend the fashion design program at Parsons.

After school you worked for Isaac Mizrahi and the Gap. What was that like?

I learned a ton about a very high-end business and then a very well-run business. For Mizrahi I would go to the fabric mills and look at unbelievable fabrics. We were designing prints. It was very cool. Then the Gap had Mickey Drexler at the time – very well run. I purposely had two very different experiences. I took in a lot from both jobs.

How did you transition into the shelter industry?

I had a friend whose husband bought a home furnishings brand and he wanted to start to do proprietary product. He got me to come on because he knew I was doing surface textile design. I eventually put some of my own stuff on the floor and it sold, so I was like, “I’m just going to start a company.” And I did.

Do you remember your very first Dwell collection? What was it like?

It was very geometric, very Scandinavian influenced. It had bedding, tabletop, pillows, and throws. It was a lot, but I knew that stuff was easy to ship. The last thing you get into is furniture – it took us ten years to get there. The logistics can be very difficult.

Things have certainly grown since! Are you still involved in the design today?

Very involved. Nothing goes out the door at our office without me seeing it.

How would you describe your personal aesthetic?

I would say eclectic, modern, luxe. Like this carpet – it's silk, but it’s a neutral. I like clean lines, but I like a little extra. I also like to mix periods. I think that defines my style.

You just released your fourth fabric line with Robert Allen. What was the inspiration there?

I’m in the middle of writing a book coming out in September 2014 and I’ve been spending a ton of time in the Conde Nast archives. I was so inspired by the thirties through the sixties in American decoration – that really informed this fabric collection.

Who are some designers in history that you admire?

There are so many. When I was in the Condé Nast archive I went through years of old House & Garden magazines and what amazed me is that people like Billy Baldwin and David Hicks and Dorothy Draper – now obviously we think of them as greats, but even then their work leaped off the page. Even then they were truly great.

Where do you go to get new ideas and inspiration?

I travel all the time and before I go places I do a lot of research. I always hit the flea market wherever I am, whether it’s Frankfurt or Shanghai, and I always go to the local museums. Also, just walking the streets of New York is inspiring. Living here in SoHo I am bombarded by amazing street style every day.

How do you keep track of it all?

My iPhone is indispensable. I’m a serial Instagrammer. I sketch, I take photos. I have a whole inspiration folder on my phone.

Let’s talk about the flagship store here in SoHo.

It’s just around the corner. I’ve always lived in SoHo. Our office is here. It felt very authentic to us to be here. Sometimes on my way home I’ll drop in and check on the merchandising. There’s also a whole renaissance happening in lower SoHo for furniture and we wanted to be part of that.

What’s it like raising your two kids in the heart of it all?

It’s amazing. My kids are exposed to so much. I can take them to see Willem de Kooning at the MOMA. There’s always something interesting for kids to do whether it’s exploring one of the city’s new parks or going to the Big Apple Circus. We also have a little house in the Hamptons and I think the balance is good. They run around on the weekends.

Do they ever tag along on your travels?

All the time! My kids are intrepid travelers now. We went to Morocco over Christmas. They loved it. They’re up for anything which is so great. I took my daughter along with me on a business trip to San Francisco recently. We had so much fun.

Let’s talk about this amazing loft you live in. How did you find the space?

It was a lot of space for not a lot of money six years ago. The place was kind of crazy and people couldn’t see past it. We saw a great open space that we wanted to transform. We gutted it and we did it. We renovated for a year. Designing it all from scratch was so much fun.

Tell me about your library. You have quite the book collection.

I’ve been collecting them over time. I love to collect vintage cookbooks and my first degree was in art history, so a lot are about that. I spend a lot of time at the Strand. I think it’s the greatest place to find vintage cookbooks. I also just love books with beautiful linen covers. I always pick up a book if I’m at a museum exhibition. I go back and look at them for inspiration.

Last, I have to ask about this amazing piece of art above your sofa.

That is from my husband’s family’s collection. It’s by an artist named Robert Swain. They bought it down the street at the OK Harris gallery and brought it all the way back to Canada. It lived there for thirty years and then we brought it back. Now it’s just around the corner from where it was originally purchased. It’s come home. 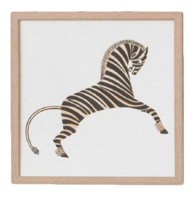 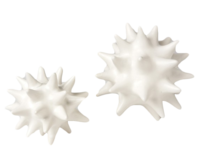 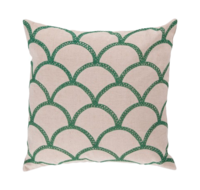 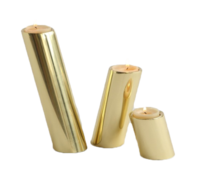 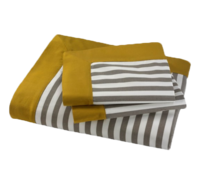 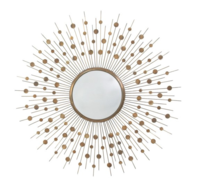 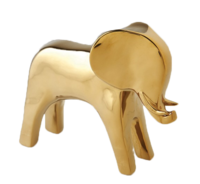 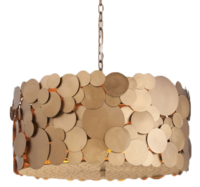 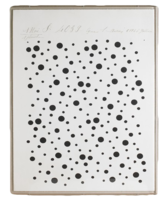 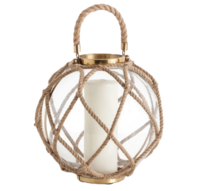 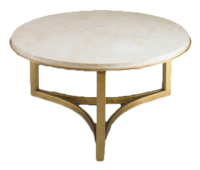 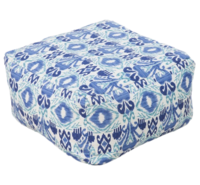 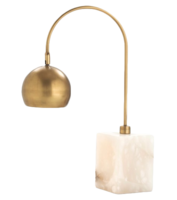 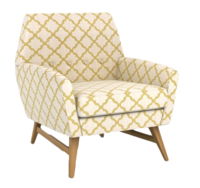 , $1,650.00
h
0 comments
Leave Comment
Submit
You Might Also Like...
Affordable Art Prints by Buddy Editions
The Matchbook and Matouk Sweepstakes!
On My Bookshelf:  Minnie Mortimer
On My Bookshelf:  Susan Gregg Koger